It’s a hot day in late July, and Kelly Lee Owens is in a haze. She’s just returned from the North American leg of her first international tour, finally able to take a breath. “We had a lot to get done in just a few days, but it was amazing,” the Welsh singer and producer says of the experience. “Right now, I’m taking stock of everything that’s happened.” Owens is referring to her whirlwind of a year, which has seen her recording and releasing her eponymous debut album and playing DJ sets across Europe with other artists such as Jenny Hval and Karima F. “It’s going to be exciting to see what happens next,” she says. “I’ve got a lot of ideas.”

Among them is her desire to work with fashion designers to create custom soundtracks for their shows. Owens has already made waves on that scene, having provided the music for Alexander McQueen’s Autumn/Winter 2017 show. When the fashion house approached her about using her track “Arthur,” she admits she had to verify that their email wasn’t a fake. “I’ve always connected to Lee [McQueen], so it was an honor to be a part of that legacy,” she explains. At the time, Owens was fully committed to the recording process, so she watched the show’s live feed from the studio. “I thought they would use just a snippet of the song, so I was completely shocked when it [was] used in full twice,” she says with a laugh.

And yet it’s easy to see why they chose “Arthur”; its churning rhythm, sultry chimes, and lofty vocals meshed beautifully with the collection, all celestials, starry capes, and dark magic. “My God,” she remembers thinking, “I would wear all of this right now. Pay me in capes!”

Owens’ onstage attire also evokes an air of mystique. She loves to shroud herself in kimonos sourced from vintage boutiques across Manchester. “My main things that I wear every day are my big black boots and my leather jacket, no matter what,” she says. Though practical when it comes to performance attire, Owens does enjoy a playful getup from time to time. “I’m also attracted to clothes that have some kind of shimmer or glitter…things that are a little bit magical. I just played FYF Festival and Opening Ceremony dressed me for the stage in this cloud paint jacket. It was all so dreamy.” 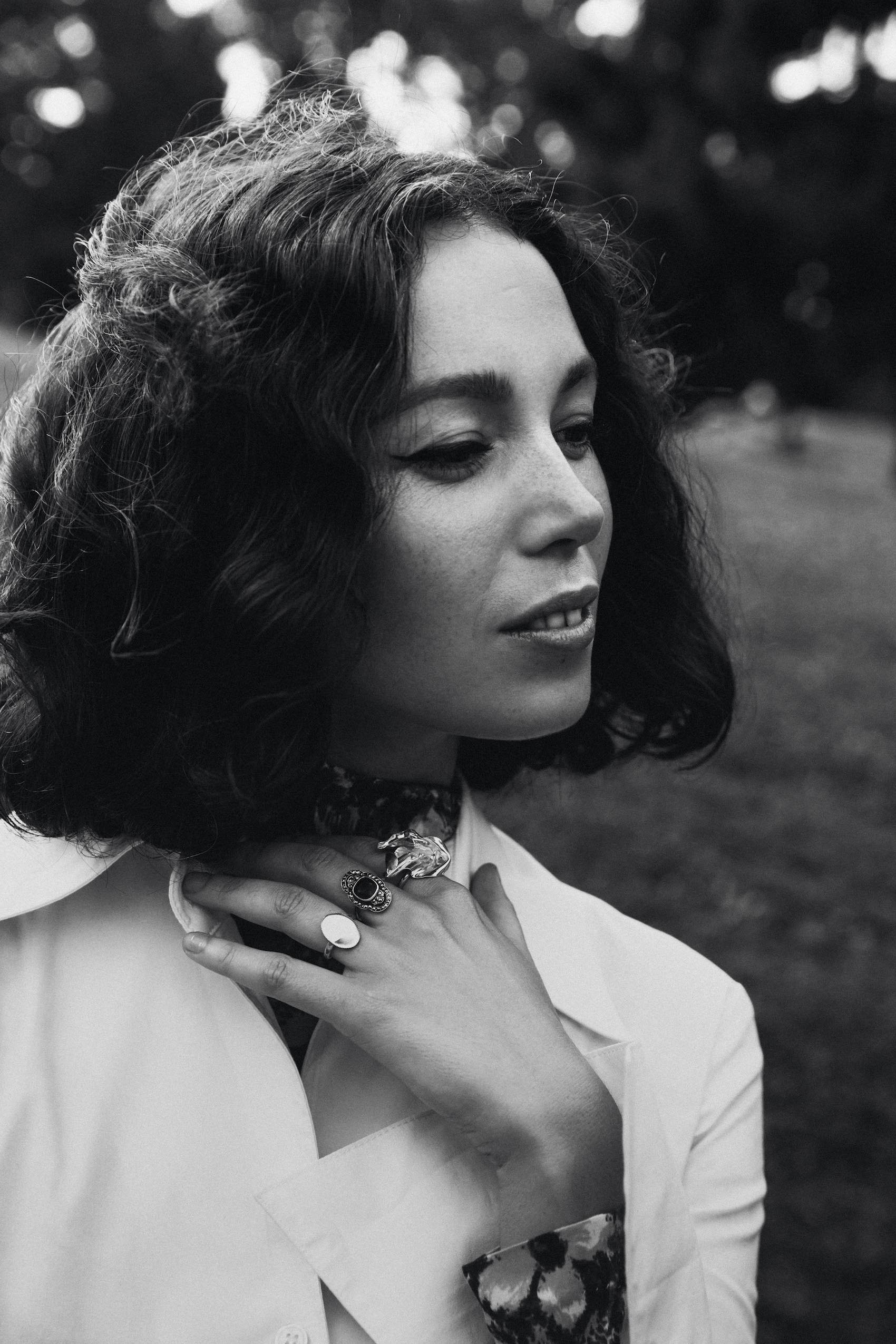 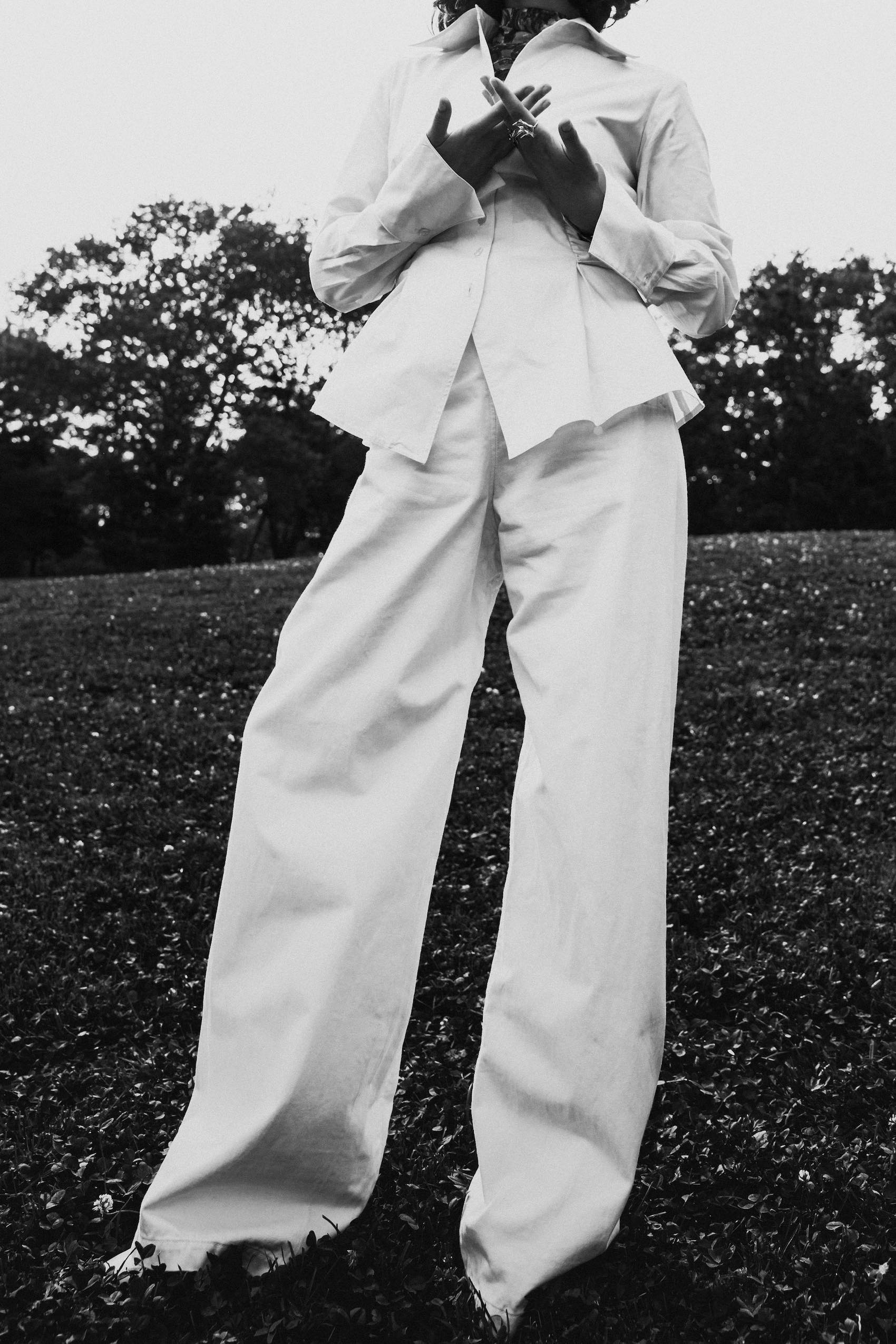 And in a word, Owens’ debut album is just that: dreamy. The record’s ten tracks transition seamlessly into one another, taking the listener on a hypnotic journey through a watercolor blend of pulsing beats swirling beneath an angelic chorus of layered vocals. She adds texture to the synthetic backdrop with found sounds like water, chimes, and bird calls. When it comes to composition, she steers away from any formulaic approach. “Too many artists think, Oh, we want to be successful and make a lot of money and be famous, so we do A+B+C. It’s so dull, and you can hear the calculation in the music.”

Owens often doesn’t know what she’s going to create until the moment it comes together, and that’s the way she likes it. “I record weird, everyday sounds on my iPhone and sometimes that will inspire me to create a track around them,” she says. “For instance, on ‘Bird,’ what you hear is literally a bird song that I slowed down.” Mixed in with a looped sequence of tones and intermittent strings, it’s manipulated almost beyond recognition. Never quite what you expect, Owens’ sound is characterized by a subtle otherworldly beauty.

“It’s just about jumping in the deep end. I feel like we’ve got nothing to lose. The worst thing is to be at the end of life and think, Why didn’t I try?”

Aside from a short stint as a bassist—during which she developed her appreciation for low frequencies—Owens has no formal musical training. But she has done her due diligence in the field, working in London record stores like Rough Trade East, Sister Ray, and Pure Groove. It was there that she discovered a wide variety of genres and artists—including DJ and producer Daniel Avery, who is now one of Owens’ closest collaborators. “Daniel gave me insight into analog production and writing, and he just said yes to all my ideas,” she says. “That’s all it takes: one person to say yes.” 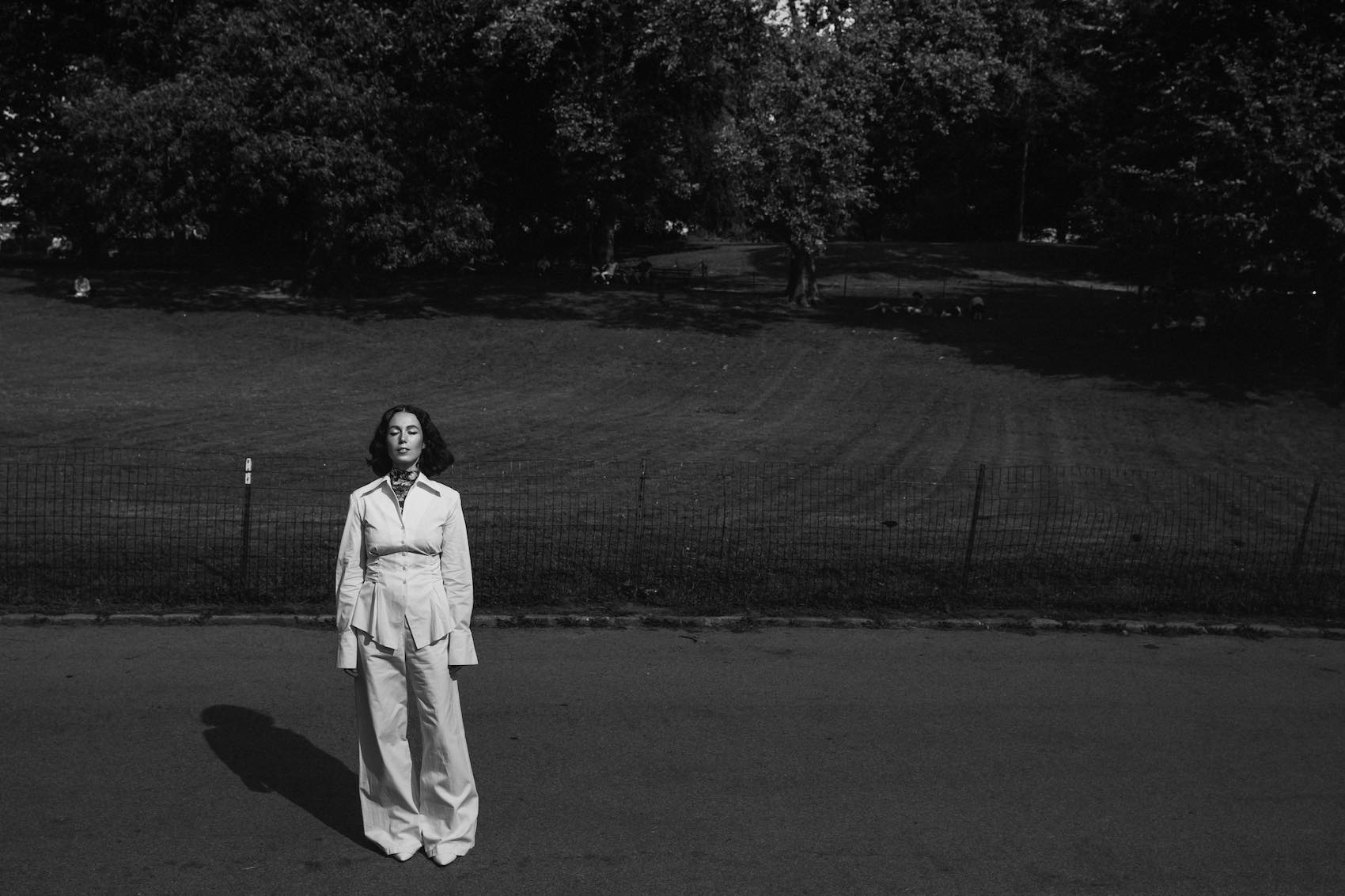 When she met Avery, Owens had been playing with the idea of making an album for a long time, but the timing had never seemed right. Finally, a friend gave her some very simple advice: to stop talking about her plan and just start doing it. “It’s just about jumping in the deep end,” she says. “I feel like we’ve got nothing to lose. The worst thing is to be at the end of life and think, Why didn’t I try?” Owens hopes that her story will inspire other female would-be artists to throw caution to the wind. She hopes to create a workshop where women can experiment with composition in a safe and constructive environment. “I want to continue the theme of working with female artists and producers if possible,” she says. “There needs to be more of us present on the scene together.”

Amid the buzz from her runway debut with Alexander McQueen, Owens signed with Norway’s Smalltown Supersound; the label’s philosophy aligns with her personal goals of longevity. “I want to be doing this twenty years from now,” she says. And after taking her debut LP on a lap around the world, Owens remains in charge creatively, free to develop her sound in whatever time that requires. It’s clear that this is just the start of her story. “I want music to be my life, and to look back on my life’s work knowing that it touched people the way music has touched me.” 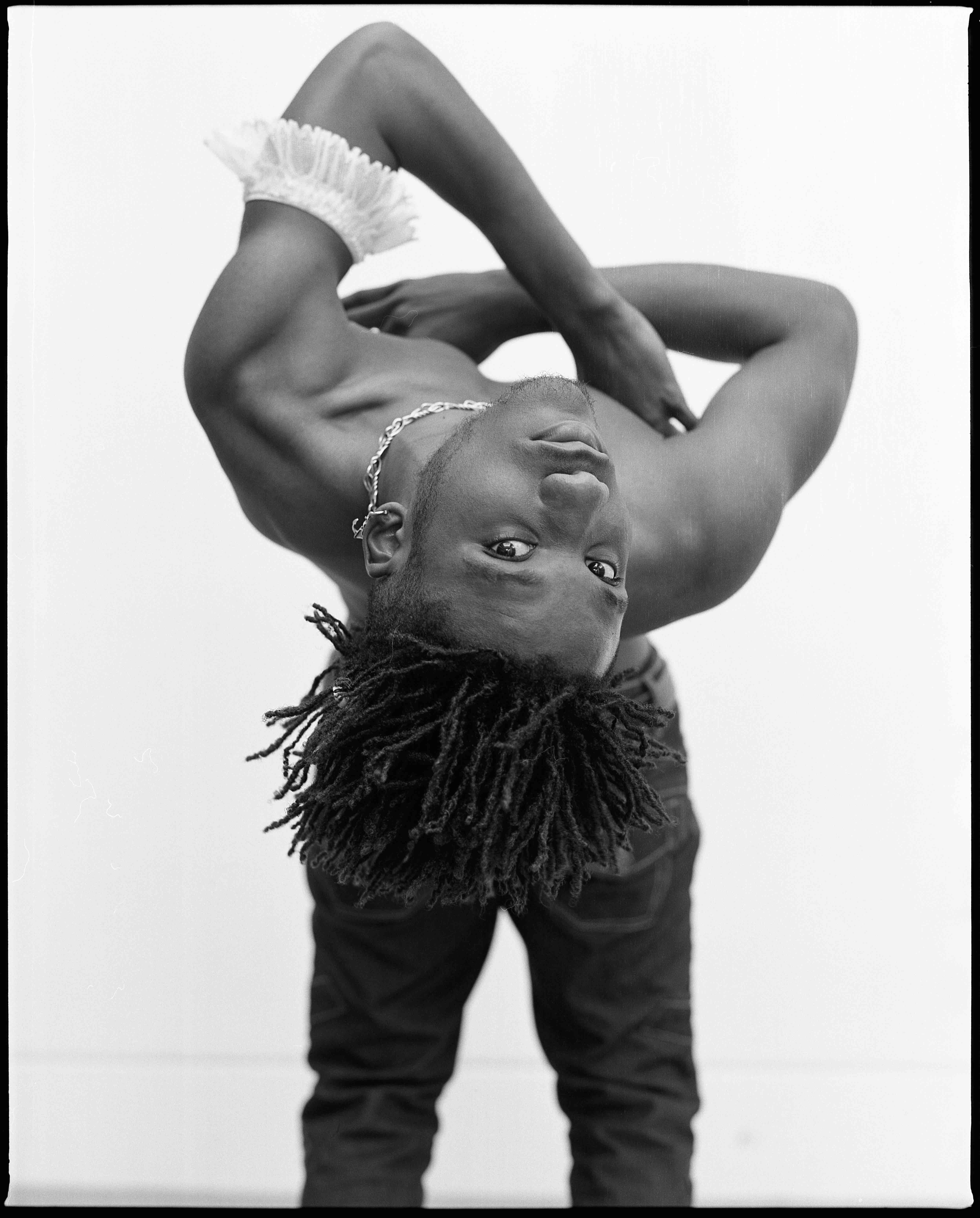 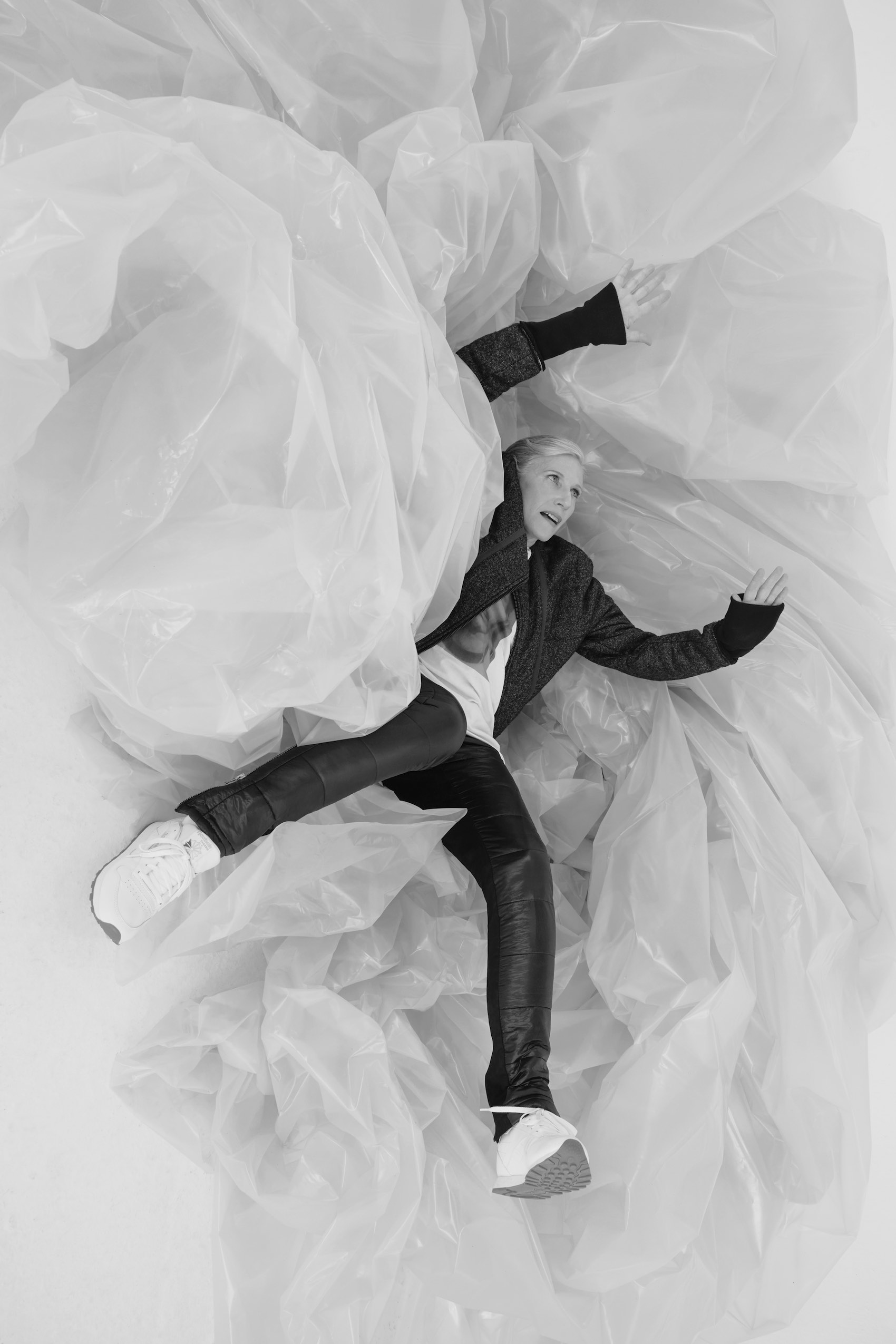